I like to watch movies. Especially if they cause me to think about them long after I’m done watching them. The recent Superman flick, Man of Steel, did this for me.

As a character, Superman is seen as a hero of the human race. He has been depicted in a huge number of comics, stories, movies, and shows as saving us from ourselves and other evils out there.

In the movie, Jor-El (Superman’s father) offers this quote about his son’s future:

You will give the people an ideal to strive towards. They will race behind you, they will stumble, they will fall. But in time, they will join you in the sun. In time, you will help them accomplish wonders. — Jor-El

Jor-El had a plan for his son: To give these creatures something more. Something that they might not otherwise have been able to imagine.

In his father’s eyes, Kal-El (Superman) has something great to offer the people of planet Earth.

The power of choice

In the movie, Krypton operates like a machine. Natural birth is unknown to them. Unborn infants are grown and genetically disposed to certain traits which will allow them to fulfill their predefined roles to their greatest ability. In this system there is no freedom of will. Although Kryptons once possessed the power of choice, they consciously decided to end such an ability to ensure the brightest future for their race.

If we place Krypton on a chart, with the metrics of free will and the ability to do powerful things, we can see Krypton moved from a place of great power and free will to a place where they still had great power but lost their ability to exercise free will: 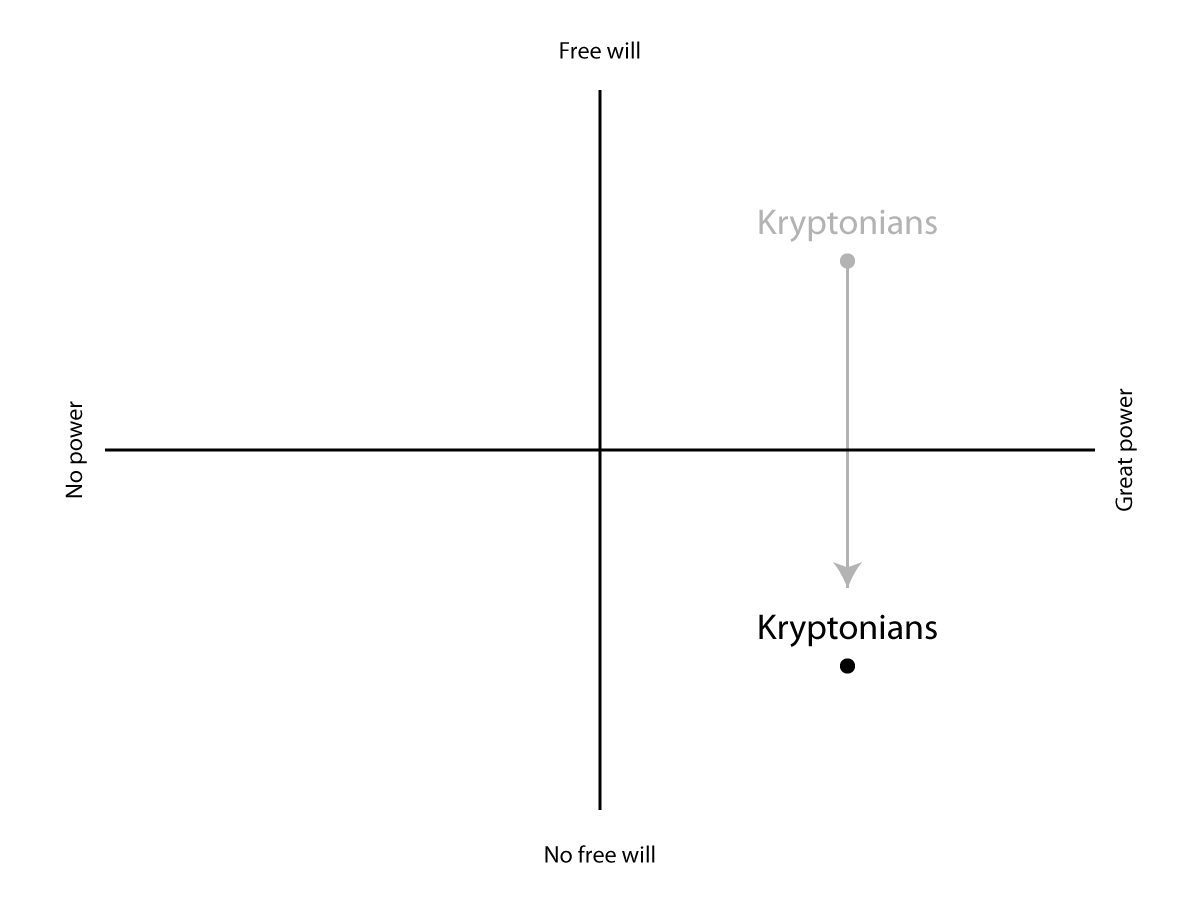 Humans, though they have the freedom to choose how they do things, are nevertheless extremely weak when compared to the technical and physical power of the Kryptonians. If we were to place humanity on that same scale, then, we could see them like so: 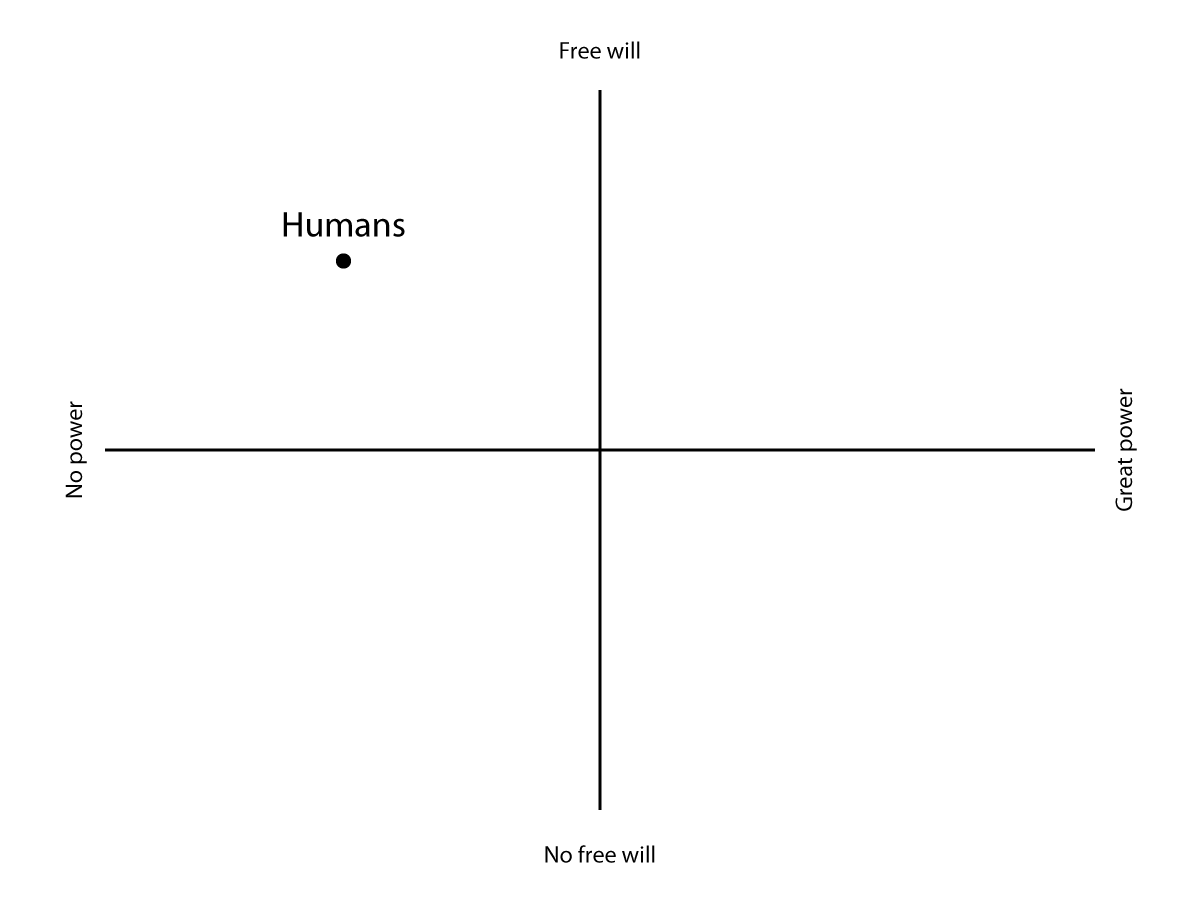 Now, Superman was the result of the first natural Kryptonian birth in a long, long time. Not only that, but he was raised by human parents who instilled within him the values enjoyed by the human race. Perhaps most importantly, his Earthly father explains this to him as a child:

You’re not just anyone. One day, you’re going to have to make a choice. You have to decide what kind of man you want to grow up to be. Whoever that man is, good character or bad, it’s going to change the world. — Jonathan Kent

From the very beginning of his upbringing, Superman was told that he had free will. Symbolically and physically free from the constraints of Kryptonian culture, he is able to not only achieve greatness in power thanks to his Kryptonian body, but also the ability to think and choose for himself how he is to live his life.

Superman can thus be placed on the chart in a place of prominence: 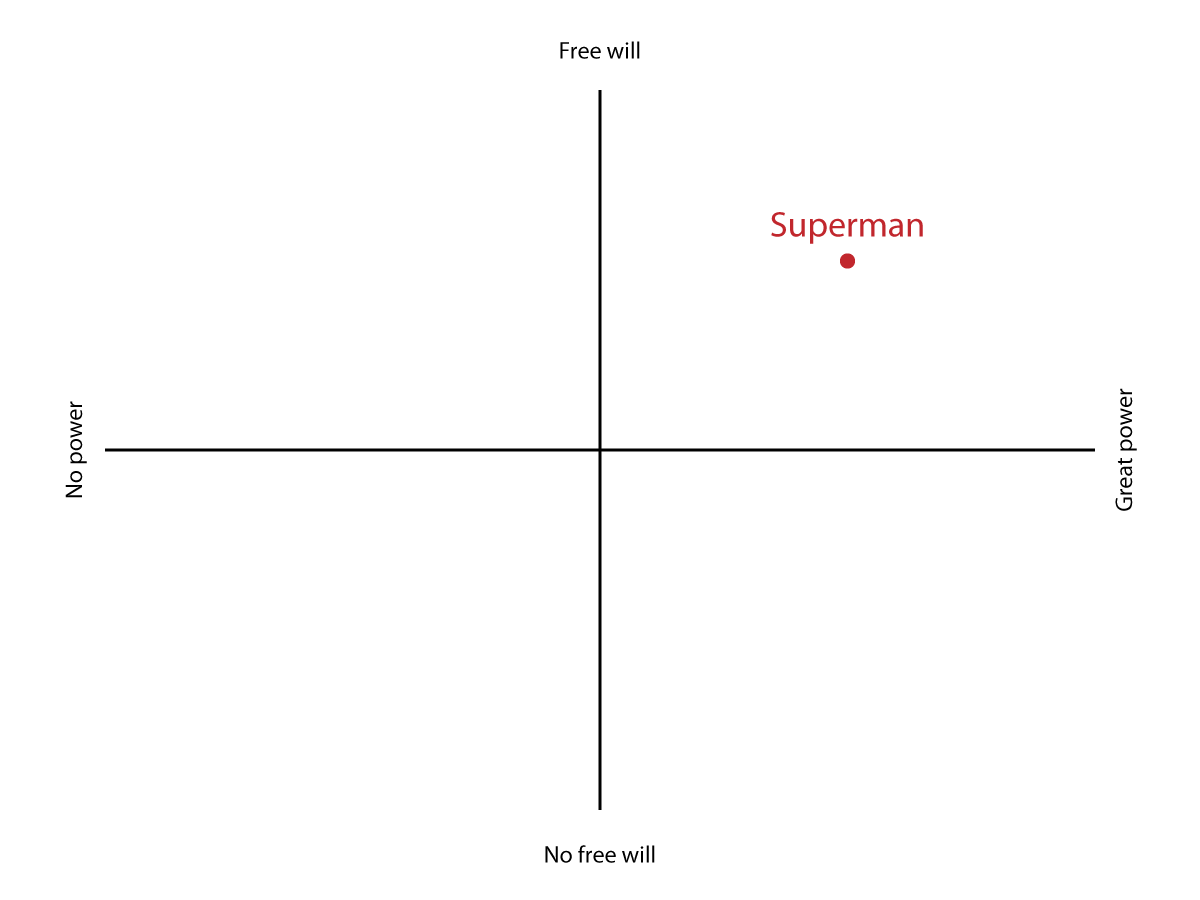 Nearly all stories of Superman involve him in some way or another saving humanity. I think this is a very narrow way of looking at things. Power is something that can be easily gained and lost. What is much more important than that, however, is the freedom to choose what you do with your power.

In that respect, Superman is every bit as much, if not more, a hero of Krypton as he is of Earth.

Posted under Notebook with tags free will, movies, superman.